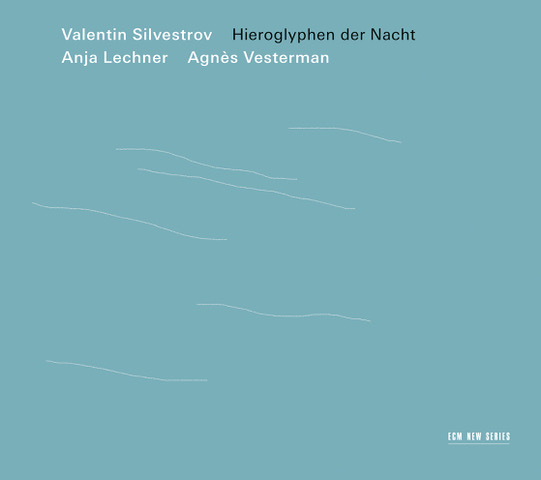 Released in time for the great Ukrainian composer’s 80th birthday on September 30, Hieroglyphen der Nacht features Valentin Silvestrov’s music for solo violoncello and for two cellos. German cellist Anja Lechner has had a long association with Silvestrov, first documented on the Grammy-nominated leggiero, pesante in 2001. Here she plays, alone, Augenblicke der Stille und Traurigkeit (of which she is the dedicatee), Lacrimosa, Walzer der Alpengöckchen, and Elegie (which calls for her to play both cello and tamtams). Lechner is joined by French cellist Agnès Vestermann, a frequent duo partner, to play Drei Stücke (dedicated to both musicians), 8.VI. 1810…zum Geburtstag R.A. Schumann, Zwei Serenaden, and 25.X.1893…zum Andenken an P.I. Tschaikowskij. As so often with Silvestrov, the compositions often take the form of metaphorical conversations with composers of the past and the present. Tchaikovsky and Schumann are amongst the composers referenced here, while Lacrimosa is a reaction to music of his friend Tigran Mansurian. “My own music is a response to and an echo of what already exists,” says Silvestrov, viewing his oeuvre as a series of “codas” to music history. Hieroglyphen der Nacht was recorded at Lugano’s Auditorio Stelio Molo RSI, and produced by Manfred Eicher.